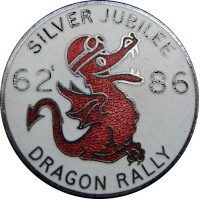 It still exists, and is a meeting for strong heart riders,in the midlle of winter.Weather conditions are always awfull, heavy rain, mud, snow, ice, strong wind, all the items to build a reputation.

Created by the Conwy and district MCC, the first edition took place in february 1962, at Bryn Bras Castle, close to Llanberis, North Wales, in Snowdonia Mountains.From the beginning it was a great success with 2000riders. The medal was in fact a piece of clothe.
Then the dragon took place in another castle, close to Abergele. Good press releases helped to increase an impressive number of participants.
— In 1965,the meeting went back to Llanberis valley, in an former quarry, which was during WW2 an amunition factory.
— In 1969 , 5000 riders came. Only bad weatheer conditions to avoid an increasing number of participants. A tradition is born when the medals of the riders registered but not there were thrown in the lake...
— In 70/71 , some disagreement among the club has lead to management problems, like the medals with diffrent shapes and design.
— In 1972 took place the last event in Glyn Padarn. The big international bikers meeting were decreasing.
— In 1974, it is teh end of nice moments in castles, the event took place in a farm in Lledr Valley. heavy rain made the meeting field a muddy area . In 75/76/77 the Dragon rally moves to a spa town, Capel Curig .Another new fam in 78/79 close to Llanrwst in Conwy Valley.
— En 75-76-77 c’est dans une ville d’eau, Capel Curig que le Dragon migra. Nouvelle ferme pour les années 78-79, près de Llanrwst dans la vallée de Conwy.
— And in the eighties the new dragon came.

The huge camp fire on the night is from now forbidden.Who remembers the Dragon's parade, lightening on saturday nightwith hundreds of bike lights, like a magical ribbon. I also find smeone's souvenir of french bikers, naked, at night in the mud!!! that was in 1970. Peter Palfalvi talk about his 9th Dragon Rally.

They celebrate the 50 anniversary in 2011, there was a report in the british magazines.

The number of bikers has decreased fro th sixties, in 1995, we wer around 500. I was lucky to be present at those two events.
When i read teh reports about the meetings in the castle, it makes me dream!! Becaus e now , it's a mess..a tent and a food truck with fries, what a program!!But so many nice vehicles we're not accustom to see.
Registration is still a pain, with a caravan on the side of the road; and always this bloody weather!!

Dragon's rally: last time I went there was in1978, effectively close to LLanwrst. there was just a caravan lost in the welsh country, and ther they gave us the exact location of the meeting...
We were slightly drunken, but clean as usually, and on sunday morning, after a four hours rest, with my friend Blondine, we found our tent peculiar, slumped down; we built it correctly? in fact lot of snow has fallen during the night and everything was stucked.
We had to take a ferry from Southampton to Le havre, and in fact we've reached a kind of YMCA at midnight in London...
On the next morning after disembarkment in Le Havre,Tancarville Bridge was closed because trucks were across the bridge, ice on the road ( and trucks from my company, because I was working at that time for Borel brothers) and the next night, at two o'clock we were still on ice on Nationale 7 in Allier.
On the railway bridge after Toulon/allier, need to piss, and the bike slided down ( Honda 4) No way to raise it!! we had to push it across the bridge because of the ice on the road, and then we were able to ride once more and back to our country, Ardèche...on wednesday night.
A well deserved medal!!I planned to go back, but time has passed so quickly Last time I went back to Wales was in 2007 for the TT hundred anniversay, on a pre WW2 velocette, but the weather was nice!!
See you on the World roads.